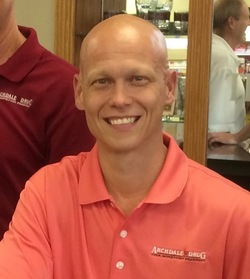 Ryan Hoskins graduated from the University of North Carolina at Chapel Hill in 1994.  While enrolled in the School of Pharmacy, he completed his residency at the Cherokee Indian Hospital in Cherokee, NC. Upon graduation, Ryan joined Archdale Pharmacy.  During the ensuing 5 years as company vice-president, he sharpened his skills as a pharmacist and business owner.

In 1999, after the sale of Archdale Pharmacy, Ryan opened Archdale Drug, followed by Deep River Drug. Ryan believes in community and citizenship, participating in any way he can be of service. He received the William A. Aldridge Award for Outstanding Community Involvement and the Duke Energy Quality of Life Award.

Ryan and his wife Jenny are busy raising their three children in Sophia, and he loves spending time with family.  He enjoys hiking, reading and anything to do with TARHEEL athletics! 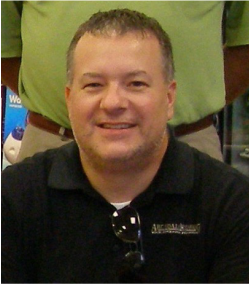 Matt Weist was born and raised in Findlay, Ohio, a small town in the northwestern part of the state.  In the 1980's his family moved to the Greensboro area where he attended Western Guilford High School.  He completed his undergraduate studies at UNC Greensboro then began his 4-year study at Campbell University, completing his Doctor of Pharmacy in 1994.  Matt joined K-Mart in High Point as the Pharmacy Manager, then moved to the same position with Wal-Mart before transitioning to Archdale Drug in 2005.

Matt and his wife, Christy, have three sons who keep them busy with their various activities.  They love going to Disney World and to the beach.  Of course, Matt lives and breathes anything having to do with The Ohio State Buckeyes which gives his fellow UNC Tarheel fan employees something to talk about! 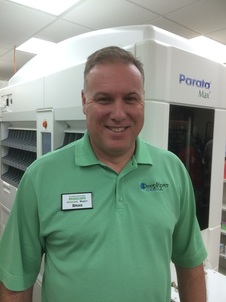 Born in Florence, SC, Brian Marks and his family moved to Monroe, NC when he and his sister were quite young.  After graduating from Monroe High School, Brian attended the School of Pharmacy at UNC-Chapel Hill, earning his degree in 1994.  His first position as pharmacist was in High Point at the K-Mart on N Main Street. When the location closed, he worked at Revco/CVS, eventually being promoted to Pharmacy Manager in charge of opening the new CVS store at Eastchester/Centennial.  He subsequently worked for Target and joined Archdale Drug in 2005.  Currently, Brian is the Pharmacy Manager at Deep River Drug.
​
​Brian's love for the pharmacy profession, comes naturally with a family twist.  His father, uncle, and 2 cousins (as well his cousin's wife) are all pharmacists.  Can you imagine the conversation at family gatherings during the holidays?  As a child, Brian hung out at his father's drug store in Monroe.  When he was old enough, he began to "help" his dad.  He was quite proud to hold that first "real" job; pharmacy is definitely in his blood!

Brian and his wife, Amber, have two sons, Drew and Rylan.  Time with his family, which enjoys traveling together, is top priority for Brian. 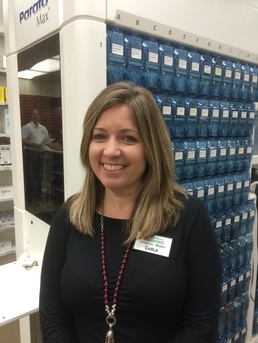 Carla Ferrara was born and raised in the "Queen City", Charlotte, NC, with two younger brothers.  She attended UNC-Chapel Hill where she earned her Bachelor of Science Degree in Pharmacy.

Following graduation from UNC, Carla began working as a pharmacist at the Carolinas Medical Center and later at Nalle Pharmacy, both located in her hometown.  While at Nalle, she developed a love for the independent pharmacy setting.  It allows for the opportunity to interact with patients and to discuss their individual concerns.  After moving to Jamestown NC in 2000, Carla continued her work in Charlotte, commuting for six years before joining Deep River Drug in 2007.

Carla and her husband, Mike, have two children, Collin and Macy.  She enjoys reading, traveling, and spending time with friends.  Much of her "free" time involves watching Collin's lacrosse games and Macy's gymnastic meets! 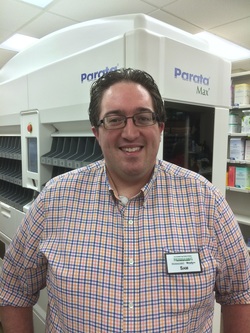 Sam Forrester was born in Greensboro, NC, but grew up in Trinity, along with his younger brother who is following his big brother's footsteps by studying pharmacy at Wingate University.

After graduating from Trinity High School, Sam attended High Point University.  He graduated in 2005 with dual degrees - a Bachelor of Arts Degree in Chemistry and a Bachelor of Science in Biology.  Not satisfied with those degrees, he went on to earn a Master of Science Degree in Clinical Research from Campbell University.  Only then did he begin pursuing his Doctor of Pharmacy Degree, graduating in 2013 from UNC-Chapel Hill Eshelman School of Pharmacy.

​During his educational career, Sam worked for eight years as a pharmacy technician for Kerr Drug and Walgreen's.  Before joining the Archdale Drug "Family of Stores," he spent two years as a Pharmacy Manager at Walgreen's.

Sam and his wife Rachel have one son, Gabriel.  Sam is an avid reader, and when he is not reading, he is spending time with his family. His church life is solidly invested in the Life Tabernacle Pentecostal Church in Archdale, where he serves as Secretary and Treasurer, and plays guitar in the their praise band. 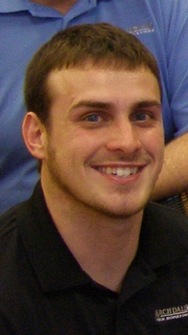 ​Born in Thomasville, NC and raised with his older brother in the Archdale/Trinity area, Chris Nichols graduated from Trinity High School.  He then enrolled at Campbell University in Buies Creek, NC, where he satisfied the prerequisite requirements to enter the School of Pharmacy there.

While pursuing his doctorate in pharmacy, Chris came home during school and summer breaks to work as an intern at Archdale Drug where he learned the value of customer service.  Upon graduation from Campbell with a Doctorate of Pharmacy degree, Chris joined Archdale Drug as a full-time pharmacist.

Chris is a sports enthusiast of the first order and an avid Carolina Panthers fan!  He loves the outdoors and spends as much time as possible breathing the fresh air he's come to appreciate.  If it has anything to do with motor sports, Chris can typically be found right in the thick of things, enjoying the competition.  Much of his time at home is spent with his beautiful Australian cattle dogs, Koda and Tex, who keep him active and on the move! 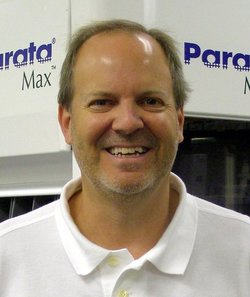 ​Trent Steffen graduated from Carroll High School in the small midwestern community of Carroll, Iowa.  After earning his Bachelor of Science degree in Pharmacy from the University of Iowa, he began his career as a pharmacist within the Oncology Department of the Kettering Medical Center in Kettering, Ohio.  Trent worked extensively within the oncology, heart and intravenous fields, and served as Director of Operations and Chief Operations Officer of long-term care pharmacies in both Ohio and North Carolina.

Since moving to our area, Trent has worked in retail pharmacy for nearly 20 years, serving as Pharmacy Manager at several large retail chains.  Additionally, he is certified in durable medical equipment, Aminoglycoside dosing, and immunizations.

After graduating from college, Trent married his wife Nancy, who now works as a Pharmacy Technician at Archdale Drug.  They have four grown children who attended Trinity High School.   Trent enjoys attending his church, socializing with friends, and spending time with family, and is a passionate fan of the Iowa Hawkeyes sports programs! When he and Nancy are not visiting the kids in New York City, Nashville, Charlotte and Virginia Beach, you will likely find them relaxing at Hilton Head, SC. 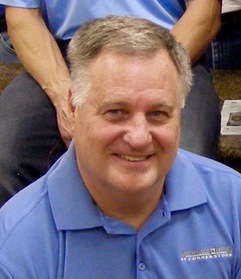 ​Following graduation from High Point Andrews in 1972, Garry Kearns attended the University of North Carolina at Chapel Hill, graduating with a Bachelor of Science degree in pharmacy in 1979.  Garry worked for 25 years as a "floater" for K-Mart Pharmacies throughout North Carolina, South Carolina and Virginia as he holds licenses in all three states.  He was in demand as a substitute pharmacist for area pharmacies including Guy's Pharmacy, Trindale Pharmacy, West End Drug and Archdale Pharmacy. After joining Archdale Drug in 2003, Garry was made Pharmacy Manager at the new Archdale Drug at Cornerstone in 2009.

﻿​Terry King grew up in the Archdale/Trinity area, graduating from Trinity High School in 1975.  After receiving an Associate's Degree from Davidson County Community College, he continued studying at what is now the University of Louisiana at Monroe, earning a Bachelor of Science degree from the School of Pharmacy.   Terry's interest in the pharmacy profession began at an early age.  At age 15, he began work at Archdale Pharmacy, continuing as a licensed pharmacist upon graduation until 1991. With the help of his family, he then owned and operated West Davidson Pharmacy near Lexington, NC for 14 years.

After selling his store, Terry worked for Eckerd Drug and Wal-Mart before joining Archdale Drug in 2007. Terry is an essential part of our team, working at all three of our locations.

Terry is a devoted family man and loves to spend time with his wife Angie and their three children, Sara, Laura and, Zeb.  In his off-hours, Terry enjoys the great outdoors,  hunting and fishing, and anything involving exercise.